Last night, Tom and I made our first batch of home made strawberry jam. This past Saturday, we went strawberry picking at Jones Family Farm in Shelton, CT and picked a wonderful basket of berries,

weighing in at 10.4 pounds. Is was my first time ever picking strawberries, and I was loving it. It’s so much fun to pick them, we didn’t realize until after we got home just how many strawberries are in 10.4 pounds. So we began to ponder, what to do with all the berries before they spoiled? Make jam!! So we googled and found a recipe that we wanted to try, one that doesn’t call for pectin and white sugar like most recipes do.

We began by prepping the berries. We hulled and halved 2.45 kg strawberries.

Then we washed the strawberries and .250 kilos blueberries — we were supposed to use 6 ponds of strawberries for the cope, but we ran a little short, and we had to measure in kills since that’s the only scale that lives in the kitchen, .448 kilos = 1 pound). Once the berries were ready, we put 3 3/4 cups honey, 2 tbsps freshly squeezed lemon juice, 2 small grated apples and all the washed berries in large pot and mixed it all together. > 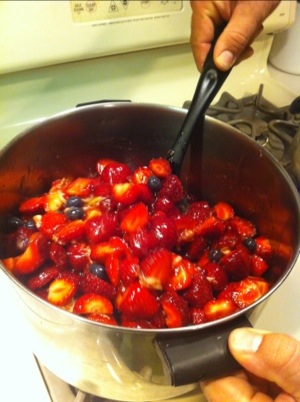 continued to mix the pot together over increasing heat until it reached a low boil. Once it was boiling, we began to mash the berries for 20 min with a hand potato masher. We then continued to boil mixture for 65 more min — it was boiling for a total of 85 minutes.

While boiling the mixture, we sanitized utensils, lids and pots. (We had already sanitized the jars in the dishwasher.) Also, we got another pot of boiling water going for the “processing” phase. Once the jam was done boiling, we laddled (if that’s even a real word) the jam into 6 pint size canning jars with the help of a funnel (which we cut the bottom small neck off of so the jam could pass through with ease).

Once the lid was on, Tom “strong finger tightened” the bands on the jars. We then placed the 6 jars into our pot of boiling water for 10 min, all the jars were covered with 2″ water during this process. After 10 min, we took the jars out of the water and placed them on a cutting board on the counter.

While cleaning up, we heard 5 of 6 lids pop within 5 min. We covered jars with towel and blanket and let sit overnight. We will move the jars to a cool, dry location later today once they are sealed.