I am thankful that this year continued the #ktomandlamargotimlbtour! The ‘tour’ actually began on Patriot’s Day 2005, 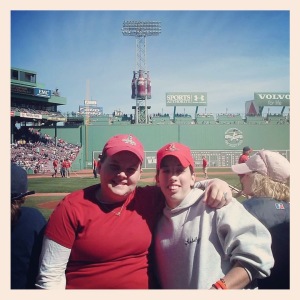 when I went to my first Red Sox game (I know, I know!). But…I was invited by Katelyn, who was going to be my college roommate the following fall, and with a three day weekend, why not do something fun? At that time neither Katelyn or I would knew that we would continue to remain roommates for the remainder of college and how much our mutual love of baseball would bring us to a new tradition. Katelyn was brought up the same as me, we we raised fans of our teams (they just happen to be mortal enemies 😲). Over the next few years, we went to many games at Fenway (it was the local stadium).

After graduation, we made it to the original Yankee Stadium so Katelyn could take in a game there. We also went to the new Yankee Stadium and Citi Field. Somewhere in there we decided to make a plan – both of us wanted to go to all the MLB parks in America, so we made a pact that every year we would go to a new park together.

Last year we celebrated #katelynstrikes30 with a road trip to Philadelphia, Baltimore and D.C. to kick off leaving our respective home towns for games (and to celebrate Katelyn’s 30th)! This year instead of seeing multiple stadiums, we had the idea to see both the Yankees and Red Sox play; there was a week in September that they’d both be at Tampa Bay back to back, so in February we planned our trip and booked it! Then Hurricane Irma hit and the trip was cancelled, so we rebooked and headed to Cleveland.

We might not have seen either of our teams play, but we did witness history with Cleveland’s 21st consecutive win (and then also the breaking of the streak two days later). We’ve already got ideas for next year! But we only have 7 teams down, so we know there’s going to be plenty more installments of our adventures together! 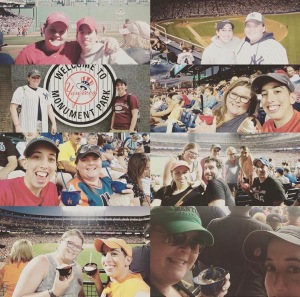 And for anyone wondering, no I will never try to turn her into a Yankees fan, just like she’ll never try to make me a Sox fan. We respect each other’s families enough to understand being raised as a member of either fandom.