May marked what is I think only the 2nd time I didn’t make it to Creative Palette class at 2nd Chance Restoration 😢. Due to a crazy schedule, I just couldn’t make it fit in last month, and boy was I bummed!! Kelly had some great projects, including 3 life size firecrackers that I so wish I was there to make. 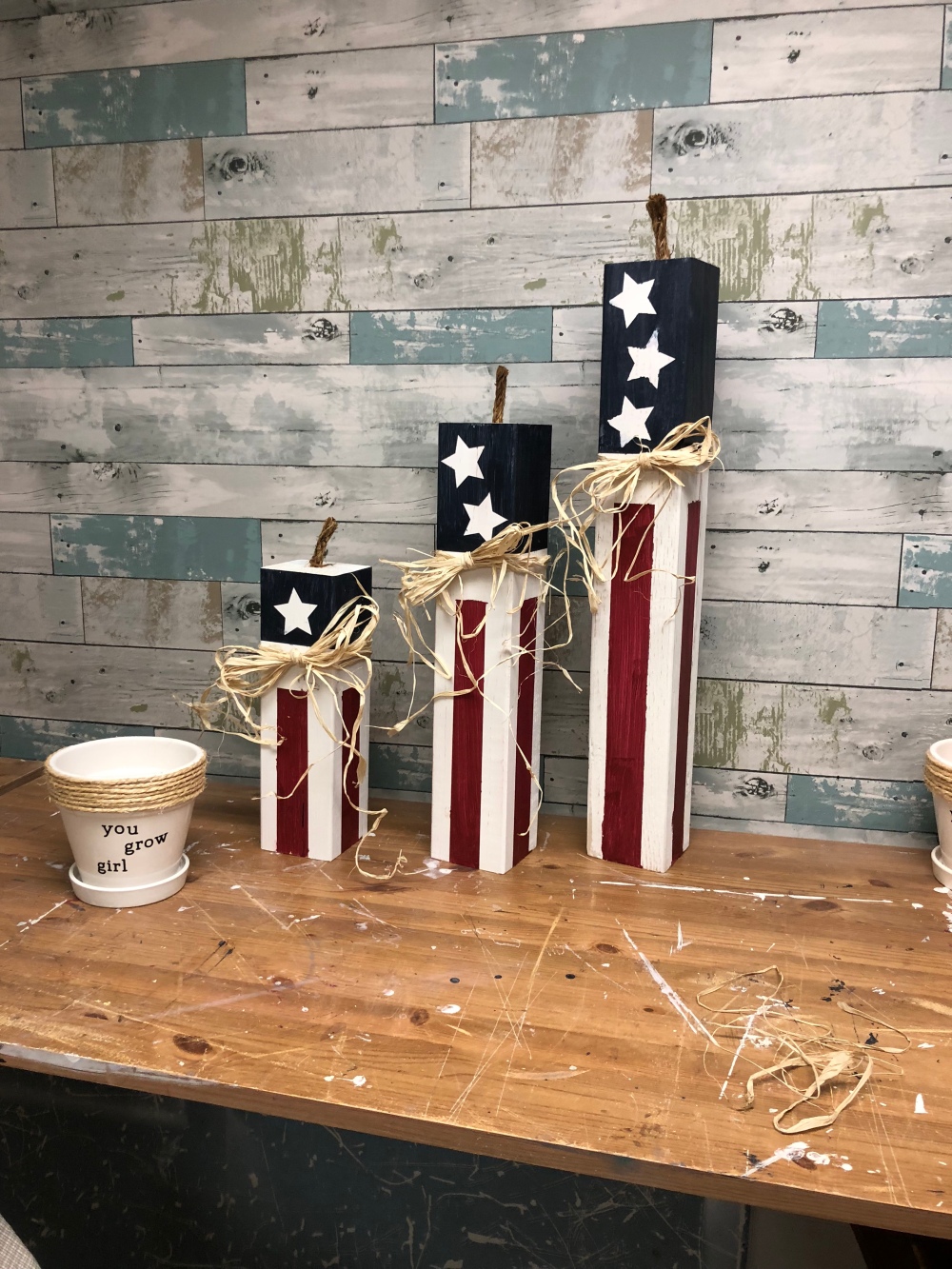 In comparison to other projects we’ve done, the pot is super easy. Around the top rim, glue some twine down and wrap the entire top rim with twine. Additionally, the class added a vinyl saying to the pot: “you grow girl”.

Once all the paint is dry on the firecrackers, apply a 1″ wide piece of tape around the wood where you want the blue area to end, about 1/3 of the way down. Then tape from there to the bottom one each corner – you want to cover everything you want to keep white. Also, on the top, apply some vinyl or tape stars to cover the white stars that you want to have showing. Before painting the other colors, drill a hole on the top, just large enough to stick the end of some rope in, to be the wick on the firework.

Then paint everything above the tape band on the sides blue and paint the lower middle section one each of the four sides red. While you wait for this to dry, you can carefully paint the top white. 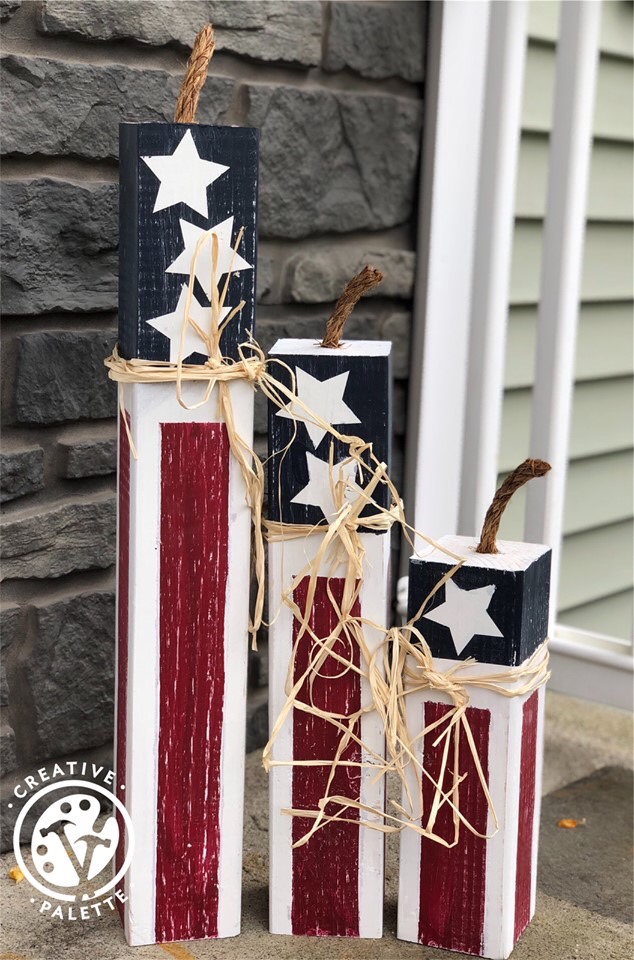 March marked the 1st Creative Palette class of 2019 at 2nd Chance Restoration! As always, Kelly had some amazing rustic/farmhouse designs picked out for our projects. We created a wooden tray and a deconstructed canvas sign during class. The wooden tray was the same one we created in February 2018; it’s important to note that Kelly tries not to do the same project again – but this one was a customer favorite and requested by many, so she caved and did it again.

We started the evening with a project that guest teacher Shauna Rogg was back for, the same Shauna from Cricut 101. Shauna passed out a blank canvas sign, such as this one which can be found at any craft store, to everyone. We took our 8″ x 10″ canvases and using an X-ACTO knife, we cut the canvas right outside the staples on the back of the frame. Once we had the canvas removed from the frame, we laid it down flat underneath the frame and taking the same knife, we trimmed the canvas to be the same size as the outer edge of the frame as we would be applying an iron-on and attaching the canvas to the back of the frame. 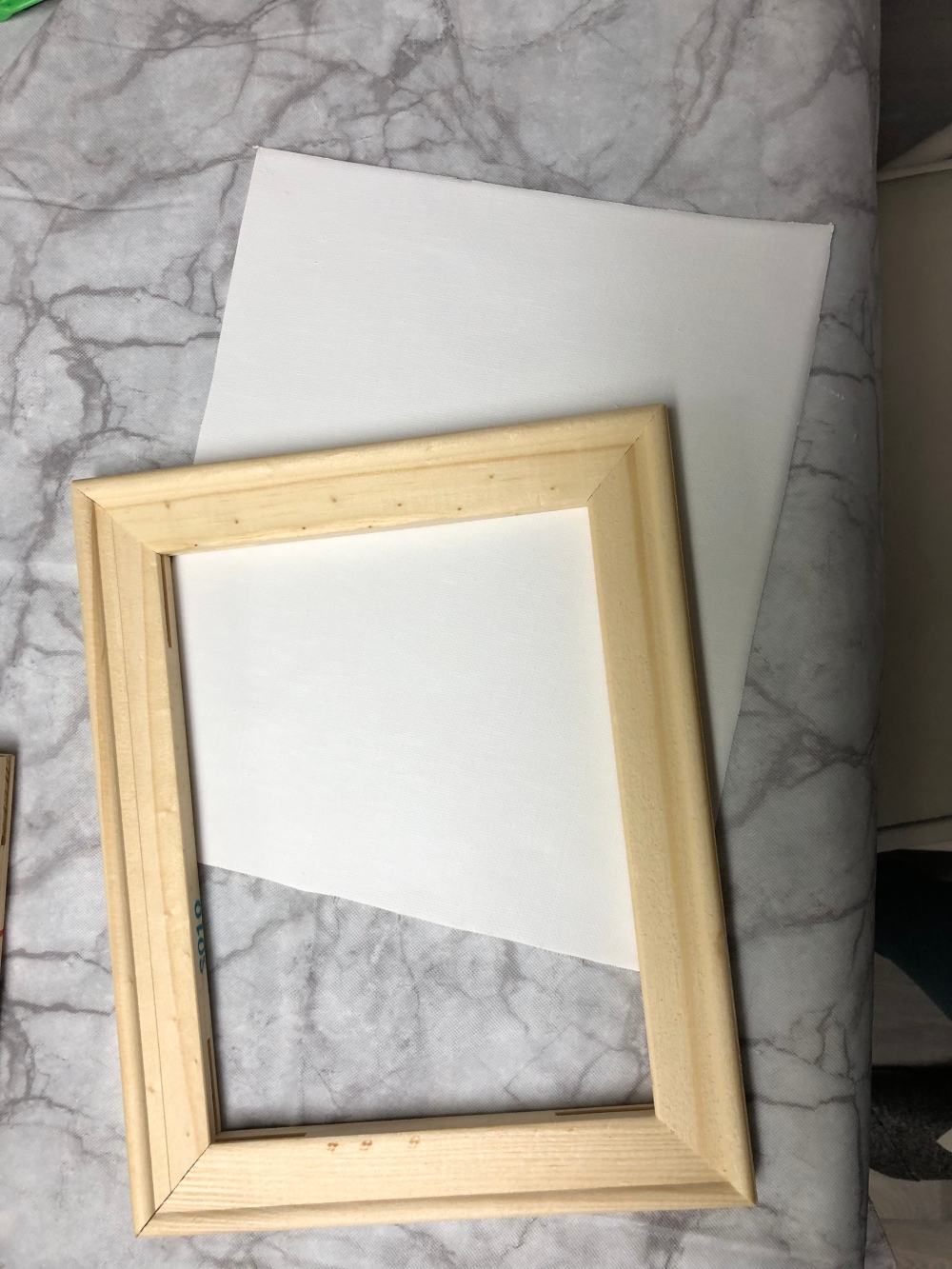 With the canvas ready, we took our wooden frames into the staining room and stained them. Kelly had three options of stain to pick from – a dark brown, light brown and light grey – I used a mix of the two browns. We then placed the frames on another table to dry and went back to the classroom to begin on the second project; our trays.

Kelly already had the boards cut for us; we needed two 14″ boards, four 21″ boards, 2 handles, 8 screws and sand paper. 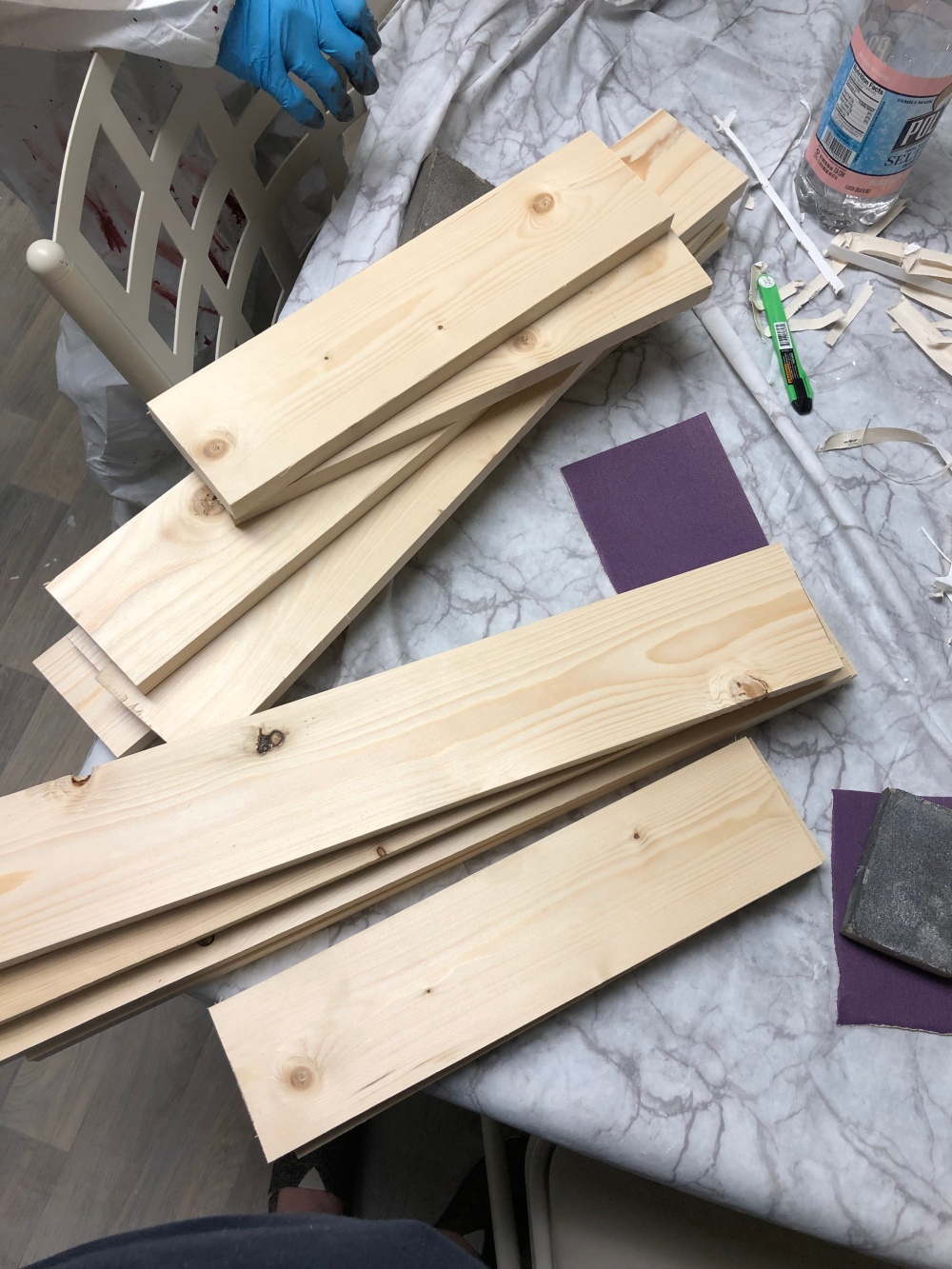 Step one was to sand all of our boards and assemble our trays upside down. The two 14″ boards which would be on the top of the tray with the handles, were set down on the table at the end of the 21″ boards perpendicular to them, laying on top. Once the trays were set up, we used a power drill to screw the long boards to the short boards from the bottom (so you don’t see them when you have the tray out and in use). We then flipped the trays right side up and measured out where we would be installing the handles, marking the spots for the handles to be attached with a permanent marker.

Then we headed back into the staining room to stain the tray. Last year I made a grey one, so this year I made a light brown one – the trays were then put on Kelly’s drying rack to dry.

While our trays dried, we cleaned up our tables, grabbed our frames that were now dry and then got a pre-made iron-on from Shauna which said “home sweet home”. We decided where on the canvas we would put the iron-on. Many people put their phrase centered and straight, but I wanted to make mine on an angle, because I don’t like to follow all the directions exactly. Then we used Shauna’s t-shirt press to adhere our iron-on to the canvas. We let them cool a little bit and then removed the plastic from the canvas and got it ready to assemble our final product.

To finish the frame, we laid the frame down upside-down, and put the canvas upside-down on top of it, so the blank side of the canvas was facing us. Then we took a staple gun to attach the canvas to the back of the frame, and viola, we had our finished product! 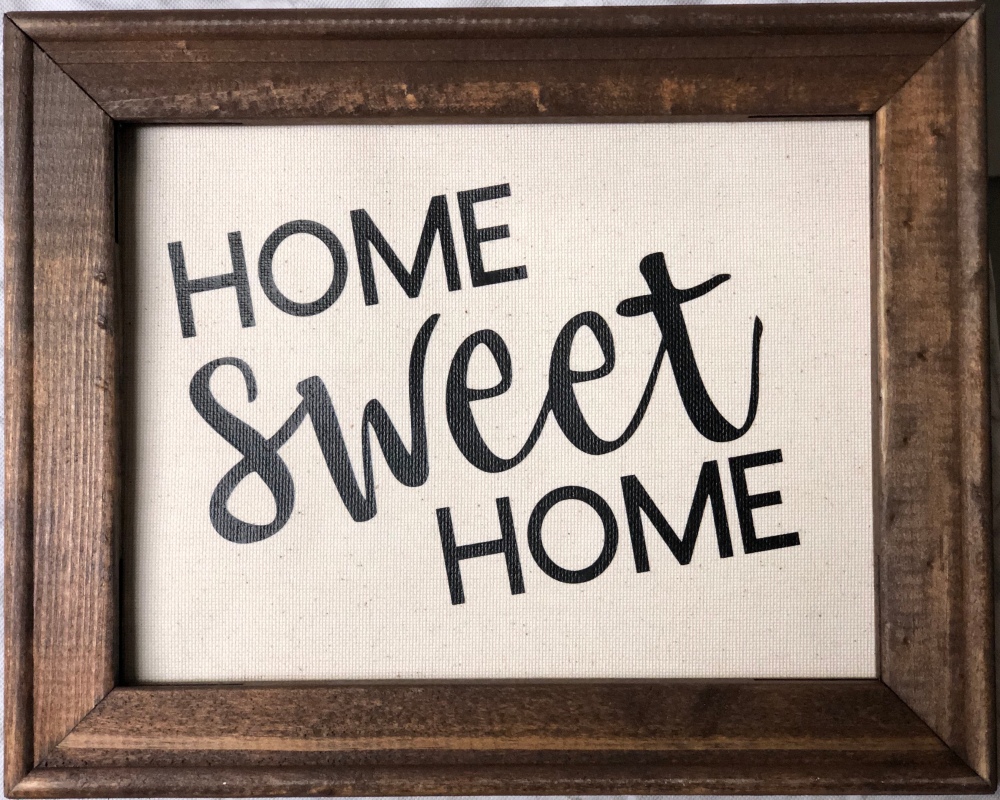 It was then time to grab our dry trays and finish those up. We started by drilling holes for the handles through the tray from the top down. Then we countersunk the holes from the bottom, about 3/4 of the way through one board so the screws would reach into the handles. We then used a phillips head screwdriver to attach the drawer pulls to make our trays complete!

When I moved to Monroe, one of the first things I did was try to get involved in the Youth Commission – it was something I did in Ridgefield and I wanted to bring my experience to help my new community, and to meet some people in my new town with similar interests to mine. One of the first people I met here was Kelly Plunkett, the then Chair of the Youth Commission. In addition to being an active mom and on the Youth Commission, Kelly was involved in what seems like everything in town, plus had a full time job, and had a side business – 2nd Chance Restoration – where she redid furniture kitchen cabinets and furniture. Since then, Kelly left the Youth Commission and her full time job to focus full-time on her own business. Recently Kelly branched out and instead of just upgrading your kitchen or furniture, she started classes for the other DIY folks in the community. Thursday night was the 1st class for her {Creative Palette} class, with a rustic home decor theme.

As soon as sign-ups we’re up, I registered (super easy registration process, btw) and then on Thursday night I headed over to Kelly’s classroom and workshop for class. Kelly had what I thought was an overly ambitious plan for class – we made a scrabble letter monogram, a tea light candle holder and a rustic barn door type tray. While I wondered how we would accomplish all of this in 2 1/2 hours, Kelly had a plan. We started with the easiest project first, the Scrabble letter. Kelly had already cut all the wood to size before we came, so we had to sand the 6 sides and break the edges to start. Then using carbon paper, we traced our letter (I did G for my last name) and the corresponding number (how many Scrabble points the letter is worth) onto the wood. Using a Sharpie oil based paint marker, we colored in our letter and number and then started in on our tea light candle holder, sanding the sides, breaking the edges and adding a small nail/tack to the top four corners. Kelly also used a paddle bit to drill in a hole in the center of whichever side we deemed the top to hold a tea light. 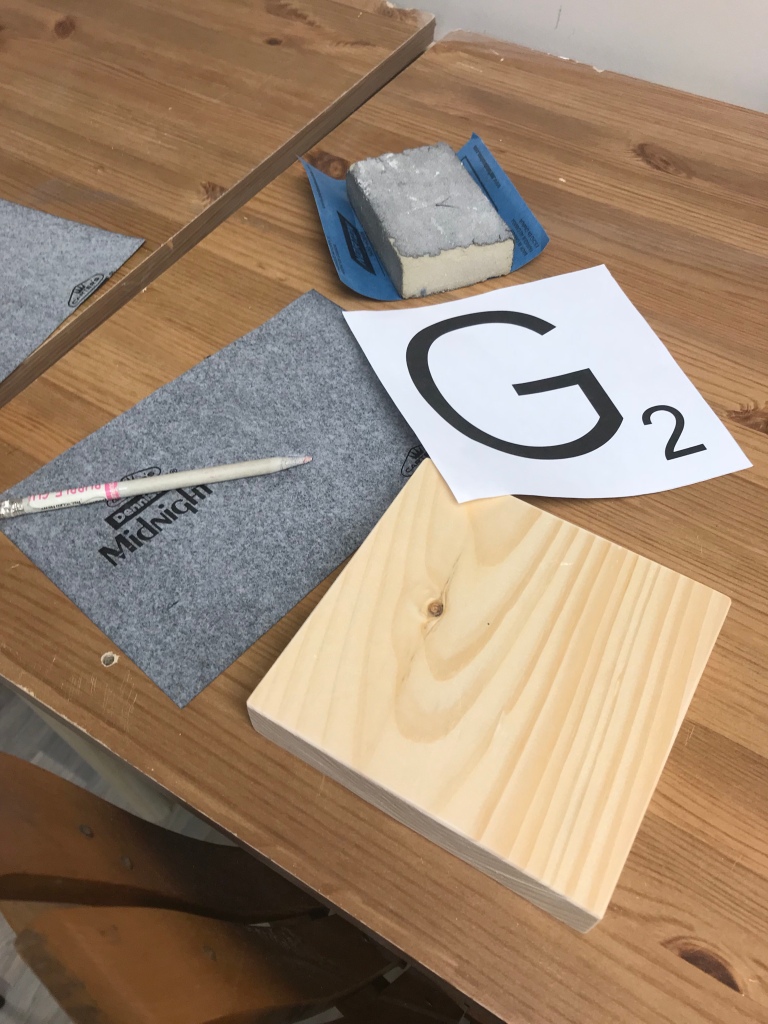 Once everyone was done, or at least almost done, with their first two projects, we began on project three! Kelly had two 14″ board and four 21″ boards for each of us – that meant there was a lot of sanding!! We all sanded our boards and then assembled our tray upside down, using a power drill to screw in screws into the end of each 21″ board to attach it to the 14″ board that ran perpendicular to it. Once our boards were attached, we had a tray! But before we could move onto staining anything, we had to drill holes for our drawer pulls which would serve as the tray’s handles. With all the sanding and drilling complete, we moved into the other room to stain our pieces. I went with a medium brown stain for the scrabble letter and candle holder and a grey stain for the tray. Staining the letter and tea light brought those two projects to completion (just needed to put the candle in the candle holder). The tray needed drawer pulls added to each end and furniture pads added to the bottom corners of the tray and viola, our trays were complete!

Kelly’s plan for the {Creative Palette} classes is to have different projects each month, learning new mediums and tools. It is something I plan to go to again and would definitely recommend to anyone in the area!